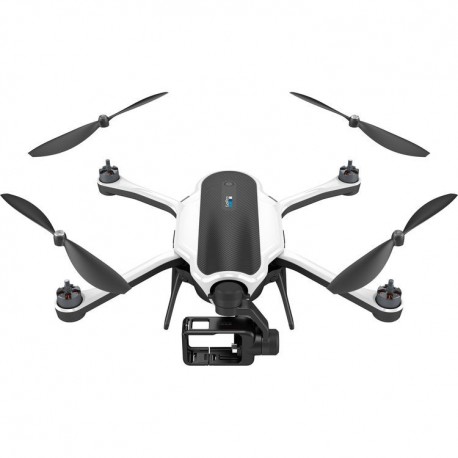 This product is no longer in stock

Convert your GoPro HERO5 Black (available separately) into a fully integrated aerial imaging tool with the Karma Quadcopter with Harness for HERO5 Black. This compact, folding drone can stay aloft for up to 20 minutes and features a detachable gimbal stabiliser that will help keep your footage silky smooth. Karma includes an intelligent, game-style controller with a flip-up touchscreen for complete control over the HERO5 Black as well as the ability to view a live camera feed. You can also buddy up with a friend: Thanks to the GoPro Passenger App, one person can pilot via the controller while a second uses the app to monitor the camera and change settings as needed.

In addition to the Karma, this ready-to-fly bundle includes a flight battery and charger; the Karma Grip handle, which allows you to use the stabiliser on the ground; and a compact case.

The Karma stabiliser is a motorised gimbal that compensates for vibration and other unwanted sources of movement to give your footage a polished, professional look. This version of the gimbal features a harness (camera mount) specifically for the separately available GoPro HERO5 Black

Detachable for Handheld Use

The stabiliser detaches and can be coupled to the included Karma Grip for use a bit closer to the ground. The Grip supplies power to the stabiliser and features video record/photo controls accessible by thumb

Designed from the ground up to give you full control of your GoPro in flight, Karma lets you remotely control all camera modes and capture settings, add HiLight Tags, and more using its built-in touch display

The built-in tutorial and flight simulator make it easy and fun to learn how to fly anywhere, anytime, even before your first flight

Automatic Takeoff and Landing
Using a single button on the controller, you can launch the Karma as well as bring it back to Earth

Built-in No-Fly Zones help prevents the drone from accidentally flying into restricted areas
Automatic Return Home
Karma safely flies back to you when out of range, if there’s a lost connection, or when the battery runs low

In addition to the pilot, a friend can get in on the action using a separately available mobile device and the GoPro Passenger App. Through the app, you can view a live feed as well as operate the camera. This means the pilot can concentrate on flying the aircraft

Pro-quality shots are easy to capture using Auto Shot Paths flight modes:
Drones
This is a selfie mode that keeps the GoPro HERO5 Black locked on you
Cable Cam
Create aerial tracking shots in which the Karma flies a long a fixed path
Orbit
In this mode, the Karma will fly along circular path keeping the camera locked on to a fixed subject
Reveal
Stay close up on the subject, then pull away for a dramatic reveal